Which Room Do Americans Value the Most?

We all have our favorite rooms in the house, be it the kitchen, bedroom, or even bathroom. For many of us, it’s the room that offers the most reprieve from our daily lives that we love the most. However, it could be the room in which you invested the most time, money, and effort into making it perfect that becomes your favorite. This is a question we set out to answer.

We have previously discussed the varying costs of renovating certain parts of your home, but when it comes time to sell your home, you can often find yourself scrambling to make everything look as good as possible. But what rooms in your home have the most value placed upon them? 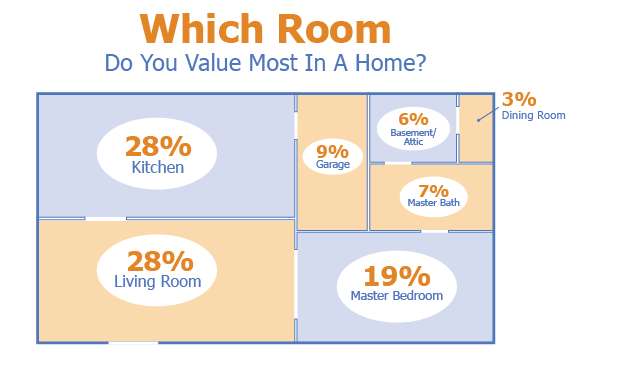 As a whole, the two rooms in which the most value is placed are the living room and kitchen, each picked at a 28.1% by the respondents. The master bedroom was not too far behind, as 19.3% of people picked that. This makes sense, as these rooms are usually where the most activity occurs. Your television watching, your cooking, and getting ready for the day are all activities respectfully represented by these three rooms. And the rooms we are in the most often are the ones that are going to mean the most to us, financially speaking.

So when you are planning which of your rooms to renovate for your family, consider which one you are in the most.

If you are in the position of selling your home, you’ll want to know which room to stage the best in order to have a better chance of it being sold quickly. Obviously it’s impossible to renovate a room on very short notice, but playing the odds could make a big difference. Do you live in a neighborhood where the prospective buyers are Boomers? Then spend the majority of time on your living room, as that’s where almost 32% of respondents aged 55-64 placed the most value. Or perhaps it’s a neighborhood with a lot of young first-time buyers? Focus on the master bedroom, because nearly a quarter of respondents aged 18-34 picked that room.

The room that matters most seems to vary greatly depending on age, which also seems to have a direct correlation to how often one is at home. For instance, 21% of respondents aged 55 or older said the garage was their most valued room. It is likely that most of these folks are retirees who work on their at-home projects in the garage, which means they are at home a lot. Comparatively, the master bedroom earned the least amount of votes for that same age group. That room was most important to the 18-34 year olds, earning nearly 45% of the vote. This could mean that people in that age bracket aren’t home a lot, but when they are, they spend a lot of their time in their bedroom.

The Choice Home Warranty survey asked respondents “Which room do you value most in a home?” using the Google Consumer Surveys tool. The survey ran in April 2015 and gathered 1,101 responses. Results are weighted by inferred gender and region to reflect the population.